Sushi Planet only opened in Adelaide in January this year and already it’s had a new menu launch.

The expanded menu includes an option for vegans, called the Fancy roll.

As with the previous launch, there was so much beautiful fresh sushi on offer!

The tuna nigiri was fresh and light with a nice touch of aioli on top.

The asparagus nigiri was bitey and a lovely bright green colour. 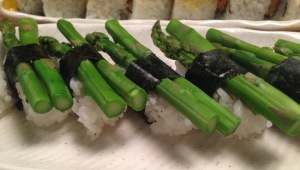 The prawn nigiri consisted of some rather large prawns over soft moist rice with a creamy dressing across the top.

And the salmon nigiri just melted in the mouth.

But the real star of the night was the sashimi. Plates of tuna, kingfish and salmon with a beautiful display including an ice sculpture.

Sushi Planet has also altered its dessert menu by creating healthy variations of popular dessert dishes, such as caramel chocolate dessert, lemon curd meringue cheesecake and tiramisu. On the night we tried the cacao and goji brownie. It was moist, chocolately and most satisfying.

Not only has Sushi Planet expanded its menu, the restaurant has also expanded its trading hours. If you love sushi but haven’t yet tried Sushi Planet, you now have even more reasons to do so. And they deliver!