Yes, there are films for foodies at the Adelaide Film Festival!

The 11-day event (15-25 October) features two films about food and food culture, which is enough to whet anyone’s appetite.

Sergio Herman, F***ING PERFECT (I decided to edit that word slightly!) is a documentary feature about 3 Michelin Star Chef Sergio Herman who has a sea change of sorts. He walks away from his Dutch restaurant Oud Sluis to spend more time with his family. We see his transformation over 12 months. A tough one, I expect, for a high pressure chef. 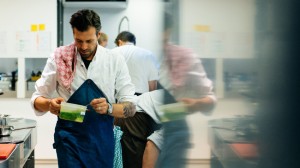 You can see a trailer (note the unedited title!) here:

The second film, Foodies, is a documentary feature all about food bloggers! The filmmakers follow them as they eat and write about their food experiences, and we explore their quirky personalities. Not quite sure this will accurately reflect the food blogging scene in Adelaide or Australia, but I’m really looking forward to seeing this one!

The film will be introduced by chef Simon Bryant, Co-creative Director, Tasting Australia.

One session has already sold out and the remaining session has some tickets available: Tuesday 20th October at 5.15pm, Palace Nova.

The trailer for Foodies:

Tickets are available direct from the Adelaide Film Festival 2015 website.

My huge thanks to the Adelaide Film Festival for providing six double passes for some of my foodie friends and I to attend these screenings.

2 thoughts on “Food on film”