We’re lucky enough to have a taste of Brazil right here in South Australia.

The Fleurieu Golf Club’s Eagle’s Nest Restaurant runs the Belo Brazilian Restaurant. A Brazilian banquet with meat cooked over hot charcoals and served at the table on long skewers.

Mt Compass is about an hour’s drive south of Adelaide. It made for a beautiful setting: looking out the floor-to-ceiling windows, watching the storm clouds roll over the hills and the kangaroos hop over the golf green in between showers of rain and the sun peeking out.

We dined with my parents-in-law who, after having a Brazilian feast on an overseas holiday, wanted to recreate that experience.

To kick off our lunch we began with the national cocktail of Brazil, the Caipirinha, made with cachaça (sugar cane liquor), sugar and lime. Wow, this packed a punch! We sipped it slowly over our entire lunch. 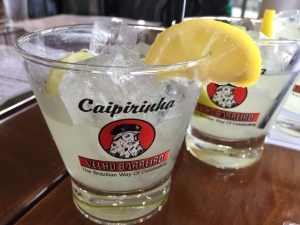 Our menu began with Pao de Queijo – Brazilian cheese bread – small round balls of cheesy, stretchy dough. Very moreish! And salty fries with aioli, which had a nice creaminess to it. 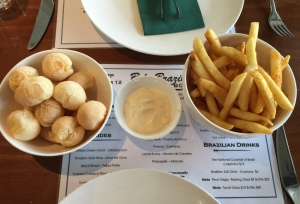 There were six meat skewers in total and six sides to compliment them. A mixed green salad, salada loca, of rocket with radish and capsicum; Brazilian style rice, arroz da vovo, which was fluffy; Black beans, feijoa preto (considered to be the national dish), which were cooked down, very moorish also; Toasted cassava flour, farofa, which we sprinkled on some of the meat; Tomato salsa, Vinaigrette, once again a nice refreshing dish with a touch of heat, and Chimichurri, which packed a bit of a punch.

We were all handed a small pair of tongs, to take the meat as it was carved off the skewers. First up we tried rump cap, picanha, which was well done and was quite tender;

the chorizo, linguica, was a little spicy but was full of flavour; 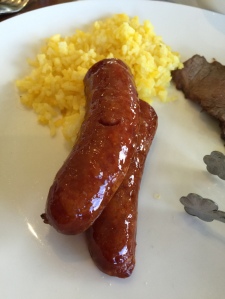 pork neck, paleta de porco, was juicy with a nice char on the outside, although some pieces were a little chewy;

lamb rump, alcatra de carneiro, was pleasantly pink on the inside;

prawns, camarao, were beautifully cooked over the coals and we ordered a second skewer!

Dessert was a whole pineapple cooked over the coals. The pineapple was coated in sugar and cinnamon and was very juicy. What a great way to cook a pineapple!

There are other optional extras on the menu such as potato salad and Brazilian chillies but we really could not eat any more.

Overall, this was a great experience. Not only was the food full of flavour, texture, and colour, it made me excited about Brazilian food. I would certainly like to try this again.