Olives and olive oil have been an important part of food culture for thousands of years, but is it really possible to improve on something that’s been around that long?

Personally I love olive oil, especially the fruity, full-flavoured varieties; eating a piece of fresh bread dipped into olive oil is one of life’s simple pleasures.

I don’t know a lot about the process of making olive oil so when I was invited to a tasting by Cobram Estate Olive Oil, at Peel Street, Adelaide, I jumped at the chance.

South Australia’s climate is likened to that of the Mediterranean, and olive groves are in plentiful supply, but most of Australia’s olive oil has been imported from Europe. In 2001 Cobram Estate launched onto the Australian market, after seeing a gap in the market for premium Australian-produced olive oil. Many of their oils have gone on to win national and international awards.

To make extra virgin olive oil the olives are picked at peak ripeness, which is when they have the highest levels of antioxidants. The olives are cold pressed within four to six hours to maximise freshness and retain the aromas and flavours. 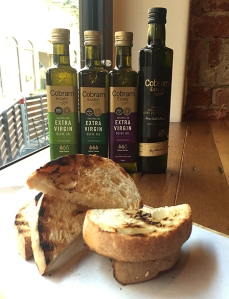 We tasted five extra virgin olive oils, four of them from Cobram Estate. Extra virgin is meant to be the highest grade of olive oil, high in natural antioxidants and polyphenols.

Tasting olive oil is in many respects like tasting wine, involving a sense of smell as well as taste. We were told to put the cup in the palm of our hand, place the other hand over the top to cover it and swirl. We then smelt the aroma of the oil and took a sip, swirling it around in our mouth.

The first one we tried was the classic flavour intensity, which was quite peppery at the back of the throat.

The second had a light flavour. This one has the aroma of green bananas. It was a light, clean and not too greasy olive oil.

The third was a robust flavour, darker than the first two olive oils, with intense pepper on the palate and a more bitter aftertaste.

The fourth oil was made from a Spanish variety of olive, Hojiblanca (“white leaf”). It’s quite green in colour with a very fruity aroma. We were told it’s greener in colour as the olives were harvested earlier in the season. The colour itself is not a good indicator of the quality of oil.

And the fifth olive oil we tried was a non-descript supermarket brand, not belonging to Cobram Estate. After tasting so many good oils, this one really stood out as being poor quality – it was disgusting. But we were able to appreciate the comparison between the premium and the not-so-good oil.

I was under the mistaken impression that I couldn’t cook with olive oil and heat it to a high temperature. But we were told that high quality extra virgin olive oil has a smoke point between 200 and 215°C.

The next time I’m cooking or dipping bread into some olive oil, I’ll have a greater appreciation of how it made its way to my plate. 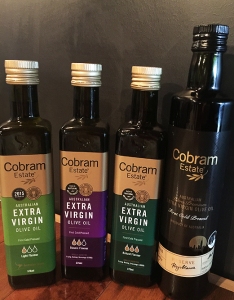