The Publishers Hotel in Franklin Street, Adelaide, was the original site of the newspaper The Stock Journal, with the building built in 1914. Late last century it was transformed into a backpackers hostel, and now it’s a pub with a modern restaurant and wine bar.  A beer garden will be opening there early next year.

The Publishers Hotel in its current form is just 18 months old and has launched a new  menu, with Head Chef Daniel Brooks designing a modern Australian menu from local ingredients.

On arrival in the bar, we were served smoked oysters, with the plump oysters sourced from Coffin Bay. Accompanying this was The Lane’s Lois sparkling wine. A great start to the evening. 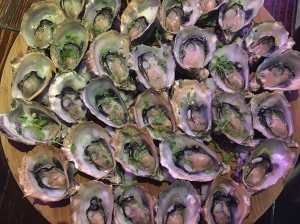 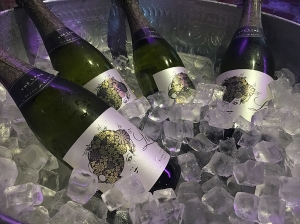 We were then seated in the dining room at the rear of the Hotel. On the table were four glasses of wine for us to sample with our courses. These included Karawatta’s Sauvignon Blanc, Rusden Special Blend, Honey Moon Pinot Noir and Mediterrane Sangiovese. We finished with the Kenton Valley Gestalt Botrytis Viognier.

We enjoyed a sample plate of the new entrees.

These included confit ocean trout, crispy olive, Persian feta and mint sauce. The trout is from Tasmania, the olives and the Persian feta both sourced from South Australia’s Limestone coast. I quite enjoyed this dish with some different textures.

The venison carpaccio is smoked in house and served with strawberries, finger lime and baby capers. A pleasant dish with a variety of flavours from smoky to sweet to salty.

The speck-wrapped quail was served with fennel puree and kumera crisps (a white sweet potato). The quail was moist and the fennel puree was creamy without being overpowering.

The breaded lamb terrine is served with pickled carrot, confit garlic and potato puree. Lamb shoulder is used for the terrine with the gelatine from the meat helping the terrine set. This was my favourite of the entrée selection with the terrine soft and moist with the pickled carrot offsetting the fattiness from the lamb.

For mains we once again had a tasting plate.

The kangaroo rump was served with candied cumquats, fennel puree, salt-roasted kumera and jus. The kangaroo is shot specifically for them in Central South Australia and the cumquats are from the Adelaide Hills and are candied as they are normally quite sour. I really enjoyed the kangaroo and the small piece I had was tender. While the kumera doesn’t look very attractive it had a softness to it and the fennel puree once again was creamy and smooth.

The 16-hour pork belly is served on romesco sauce, with pickled onion, peppered pineapple and green beans. Most importantly the crackling was crunchy. And the pineapple served alongside was fantastic.

The gnocchi romana is made from set semolina served with crispy silverbeet, pickled carrot, fennel puree and pine nuts. A lovely light fluffy piece of gnocchi offset by the pickled carrot and crunch of the pine nuts.

And for dessert a deconstructed ‘picnic’ based on the chocolate bar; chocolate mousse, chewy caramel, tuile, chocolate almonds. Many layers of texture! And oh so good!! 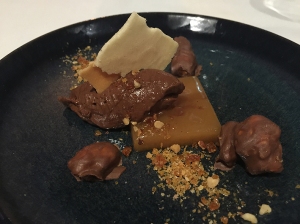 I really enjoyed the variety on the new menu at The Publishers Hotel and would find myself ordering most of these dishes.