We all have our local – local pub, local supermarket and local café: the go to place for breakfast at the weekend.

We thought we would be adventurous and try out a new place in our area – Local Grind. 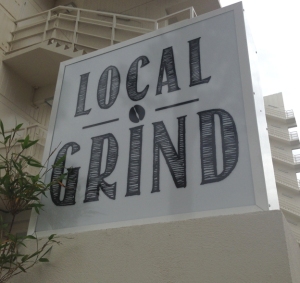 Local Grind, opened in September, is located on the ground floor of The Watson Apartment and Hotel complex. This apartment complex has been built in the old Transport Department building behind Walkerville Terrace, Walkerville.

Thankfully they have a sandwich board sign near the round-a-bout of Walkerville Terrace and Smith Street so we headed down Victoria Terrace and found a park on the street, alongside Linear Park.

At 9.15am on Saturday inside was half full with many patrons looking like they were tourists staying in the hotel rooms at The Watson. There was also seating available outside and a doggie drinking bowl too!

First up I ordered a green juice consisting of apple, pear, kale, cucumber and mint. The taste of cucumber was quite strong, but it was a pleasant tasting juice, not too sweet, not too sour.

The lattes we ordered were the perfect drinking temperature and served in cups that looked like paper take away cups but once handled we realised they were ceramic. Nice!

I ordered the bbq charred corn and shallot fritter, leaves, shaved radish and tomato relish and my husband ordered the eggs baked with capsicum, red onion, kale and white beans with grilled sourdough, and he also ordered a side of mushrooms.

The wait wasn’t too long before these beautiful dishes were before us.

I thoroughly enjoyed the two corn and shallot fritters, which had a strong corn flavour, along with corn kernels in the fritter. The rocket leaves and thinly sliced radish made a fresh accompaniment. I wouldn’t have minded a little more of the tomato relish, which had a sweet and spicy kick to it and was delicious. 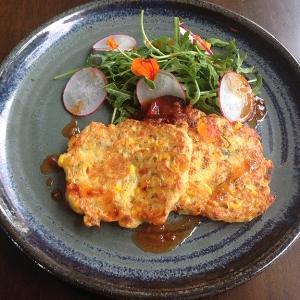 The baked eggs were equally as delicious – a mix of spiced aromas and flavours, with the beans and kale adding contrasting textures. My husband also mixed his mushrooms into the dish. Juice from the capsicum and onion pooled at the bottom of the dish and he enjoyed mopping up what was left with the sourdough.

We both noticed that there weren’t many sweet items on the menu, only the warm coconut and cinnamon oats with glazed banana, honey and pecan. On an earlier menu, and on the Local Grind website, waffles appeared on the menu but weren’t on the menu at the time we were there. I wouldn’t have minded the option of a couple of sweet dishes, either waffles or pancakes.

The café space is very modern, with a wooden panelled bar at the front, recycled timber stools for some of the benches, old doors as a feature on one of the walls and many hanging lights with what looks like the filaments lit up.  I loved those lights! 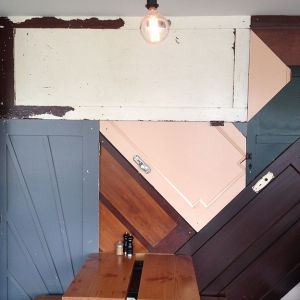 In the back corner there are wooden crates attached to the wall, housing food products for sale, such as pasta, jams, tea and more.

We really loved the vibe of the café but could have done with a bit more of a smile with our service, if you know what I mean.

Breakfast, or as it’s called on the menu, brunch, is served 7am-3pm with larger dishes, lunch, served from 11am. Dinner is also served from 6pm, but there seems to be some confusion as to which nights. I guess that’s because the café is still relatively new and they’re working out what’s best for them. In any event, I look forward to trying their dinner at some stage in the future.

2 thoughts on “A new local”

There was an error retrieving images from Instagram. An attempt will be remade in a few minutes.