The Loft Oyster and Wine Bar is a hip venue nearly two years old, perched above Gouger Street in the centre of Adelaide. It’s a large comfortable space, with outdoor seating on the balcony and lounge chairs inside. The room also includes a long bench table with stools, seating at the bar, and a sectioned off, more private area.

The Loft serves funky cocktails and following customer demand, the cocktail/oyster menu has now been extended to a full menu, under the direction of head chef, Joseph Quiniones, former Sous Chef/Acting Head Chef at Celsius Restaurant and Bar.

Guests can now drop by for a drink and stay for dinner and dessert.

The launch of the spring menu wowed us with a five-course feast with wines and cocktails to match! Mark Bolton from Nomadic Marketing was there to guide us through the wine pairings with each course.

We were hosted by the friendly Venue Manager Edward “Eddie” Alder, which the New Yorker calls one of Australia’s top ten mixologists.

We started with a glass of Mosquito Hill sparkling chardonnay, and following were two cocktails, a Sherry Cobbler and East 8 Hold Up Cocktail.

First course was Pulutan, which is a Filipino word roughly translating to ‘finger food’. This included prawn, baby squid and pork belly, all of which was moist, but I would have like a bit more crackle in the pork crackling. This was served with Mosquito Hill Pino Blanc.

Chicken was for second course, poached with ginger broth and wild rice. The chicken was tender in the ginger broth, which was fragrant but not too overpowering, with wild rice scattered through the broth. This was served with a Mosquito Hill Sauvignon Blanc and 20th Century cocktail containing gin, lemon, Kina Lillett and cacao. A lovely pairing!

Third course was what I was looking forward to – duck! Sous vide duck breast with beetroot, Brussels sprouts and calve nero. The duck breast was thick and tender, although this method of cooking does not lend itself to having a crispy duck skin. The Brussels sprouts were small along with the beetroot and the calve nero was intertwined nicely with them. A lovely dish served with a white rabbit cocktail containing brown butter rum, smoked maple, fresh lemon and orange juice. Also served with Mosquito Hill Pinot Noir. 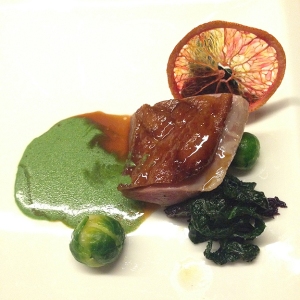 And the last savoury course was a beef sirloin with mushrooms, cherry tomatoes and chorizo. My beef was juicy and tender, although I was a little worried when the first piece I tried was well cooked and dry. Once cutting further into the piece it was much better eating. This was served with a Garfield & Thomas Cabernet Merlot. 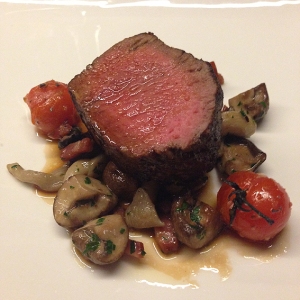 And finally for dessert, Turon, another Filipino dish. Banana and cinnamon sugar pastry with chocolate sauce, which wasn’t too sickly sweet. Katrina, who I was sitting next to, is Filipino and rated the dessert, although it could have been sweeter she said!

This was served with vodka and soda, with a tasting paddle of flavours. We had to pick a flavour and add it to our glass, stir and drink. I tried one, not sure how much to add, but didn’t get much flavour. A nice and quirky thought, though!

Oysters still remain on the menu, along with mezze, sharing plates and a variety of entrees, mains and desserts, including a sweet of the week.

Given the Loft is an oyster and wine bar, I would have loved to try some oysters, but I guess that’s a good reason to go back!

* I was an invited guest.